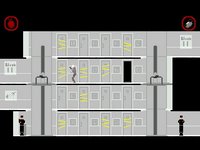 1213 Episode 1 is the latest game released by Yahtzee, as he continues to push the limitations of an aging AGS engine. Not content with Galaxy of Fantabulous Wonderment, he has created a platformer with some adventuring bits that combines the best elements of Prince of Persia, Another World and Flashback with a touch of horror thrown into the mix.

Follow the story of an imprisoned amnesiac as he seeks to escape from his captor, a mysterious figure who addresses his prisoner as a number, hence the title. Like Mechner's classic, the protagonist can jump and climb ledges by pressing Space or pushing the up arrow key. Took me a while to figure out that in the first room, Twelve-Thirteen has to climb up the black skeletal structure for the story to continue.

You're armed with a gun that can be fired repeated by holding down the TAB button. There is a bit of inventory management involved as your character can only carry a single item at any one time. A tutorial has been worked into the story seamlessly so you can get a feel of the controls without even noticing it.