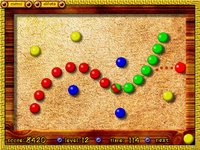 Caramba is a matching game played using colored balls that you have to shoot from any of the playing field's edges. When two balls of the same color touch each other, they will both light up during that turn. If the player manages to light up three or more balls with one single shot, these balls will disappear from the playing field.

There's a time limit to remove all balls in each level. Think pool and you have a general idea of how the game works. Holding down the left mouse button will cause the ball to travel further.

The playing field will not always be rectangular in shape. Expect to see curves and circular walls in later stages. New balls are introduced from time to time, and there are three other unlockable modes to guarantee some replayability if you manage to complete the entire game.

Quite a bit of variety to be found here, which is surprising for a puzzler based on a relatively simple gameplay concept. Some levels require trick shots while others are built to resemble a pinball table complete with bumpers.