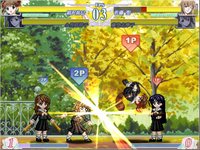 Maribato is a fighting game by DK Soft that lets you choose two characters to take into battle. Basically implementing the tag-team concept commonly seen in Capcom crossover titles, combatants fight in a slapstick manner using unconventional weapons and special moves in an attempt to knock out their opponents.

Only two characters available in this demo, but it's worth a look if you can afford to spare some bandwidth. There's a download link on the navigation menu, second from bottom.