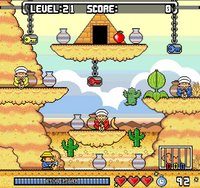 Super Stun-N-Run is a platformer recently released under the Natomic banner, where you guide an explorer named Parker who has travel to an island and save poor hapless animals trapped in cages.

Your stun gun can be used to render dangerous creatures harmless for a short moment. Most missions involve collecting keys to unlock cages before time runs out. Progress can be saved between stages.