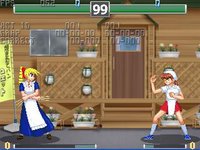 Miki the Fighting Girl by AuSYSTEM is a work in progress that shows some promise. What we have here are basic special moves commonly found in other fighting games, with the Z, X and C keys assigned as attack buttons. Currently has only three characters in it's lineup.

Download links for every single version ever released can be found just under the game screenshots, although you only really need the latest iteration.

Just so you know, this is a doujin game based on the anime series Muteki Kanban Musume, which is about this girl Miki who works for a Chinese restaurant and fights people.
Post a Comment
<< Home
Recent Comments
Recommendations