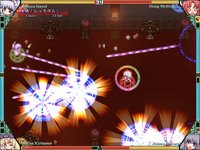 Rift in a Friendship is a fun multiplayer game developed by Lion Heart that can be described as a top-down Gauntlet-style versus battle.

The game accomodates up to four players at the same time, with health indicators shown at the top and bottom of the screen. The story mode has been disabled in this demo. After choosing one of the battle modes, you're prompted for the number of players. Once you've made your choice, the character selection screen will appear. The menu that comes next is the arena selection.

There are three download links on the page but you only need the Web version to start playing.