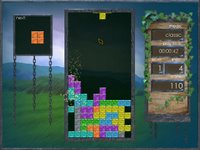 Valhalla Blocks is a decent Tetris-variant from ATIS-labs that includes several other game modes, although only three of them are made accessible in the demo. There's a two player mode but the option to challenge players online is absent.

Color mode is basically a rehash of Columns with a bigger well. Match three blocks of the same color in a straight line horizontally, vertically or diagonally to remove them from the playing field.

In kids mode, shapes may consist of four blocks or less but the core gameplay remains the same. Removing two or more lines in versus mode will cause random blocks to appear in your opponent's playing field.