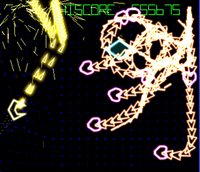 GridWars is basically a PC version of the popular Xbox 360 game, Geometry Wars. Made by Mark Incitti, this release features less special effects compared to the original but also new controls to cater for players who do not own a dual analog joypad.

The hybrid option control allows a player to use both mouse and keyboard for ship movement as well as aiming their shots.

A new version is uploaded every few days to address all issues found, although the current one released is already pretty close to the real thing. Plus there's a Mac version as well. For people who cannot afford the console (like me).

The new download link can be found in this article.

Thanks for the review - and the added traffic!