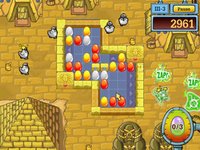 Egg vs. Chicken is an original take on the matching gameplay concept that many developers have milked dry. The premise is basically about defending the fort in each level from a horde of chickens and collecting the items that they leave behind when repelled. This is done by placing three or more eggs of the same color at the edge of your wall marked by arrows, then clicking on them to launch a counterattack.

The challenge in moving the eggs around becomes increasingly difficult as stronger enemies appear, able to withstand more damage than usual. Later levels include more castle perimeters to defend and boss battles as well.