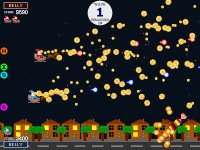 Barfer Sickmess Online is an updated version of the Christmas-themed horizontal shooter by Zapper that feels more like a shmup from Japan thanks to it's difficulty and bullet pattern similarities.

A major change introduced in this release is the online cooperative mode. To initiate a game, it's as simple as selecting online mode, typing in a name and choosing connect. You can even chat by pressing T followed by your message, then enter.

Controls are mapped differently depending on whether you're using Santa or Saint Nick. For Saint Nick, hold the shift key to shoot (F for Santa) or press the control key (G for Santa) to activate your special weapon, but only if you have some beer in your belly after drinking a few. Move Santa around by using the W, A, S and D keys.

Some enemies will leave behind alphabets, which can be collected to form the word Christmas for an extra life. Other new features include unlockable secrets and a harder survival mode.

Amazing blog and a great post too.. Keep it up, bookmarked you already.
Cheers

Wow, its a great feeling to see my game getting on websites that I never knew about! Thanks for posting about my game! :)

When it comes around to christmas again, I'm sure I'll make a sequel! ;)

I got The Daily Click's GOTW too in the end! :)
Post a Comment
<< Home
Recent Comments
Recommendations