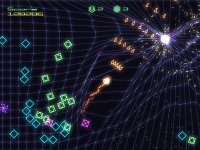 Grid Assault is another PC version of the popular Xbox 360 game, Geometry Wars. Made by Wiebo de Wit, this release is much more similar to Bizarre Creation's surprise hit than Mark Incitti's GridWars, although both versions are fun to play in their own way.

For players who do not own a joypad, keyboard and mouse controls are supported as well. Your ship can be moved around using the arrow keys. Aim using the mouse, hold the left mouse button to shoot and right click to detonate a bomb. Press the P key to pause.

Currently there are no power-ups to collect. Your weapon is automatically upgraded every ten thousand points.