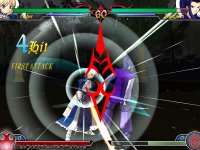 Fatal Fake is another doujin fighting game featuring characters from TYPE-MOON's popular visual novel. This version is graphically superior than the rest of it's cousins, partly due to the use of cel-shading process to render the fighters.

The camera view changes and rotates automatically so that the player can get the best view of the action unfolding on screen. There doesn't seem to be a playing manual or list of moves to be found anywhere, although arcade veterans should be able to figure them out after a few practice sessions.

Only two characters and arenas are available, but each fight could last up to five rounds and the computer-controlled opponents do offer a bit of a challenge. They're especially adept at executing 28-hit combos and will put up a decent fight. Just click on any of the trial button on this page to begin downloading the demo.

Are you patching the full version of the game or just the trial version? The patch is for the full (aka retail) version.

uhm how can i get the full version?..