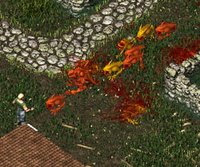 Theseus - Return of the Hero is a game by Sigma Team that uses an updated Alien Shooter engine. The first thing that most players would notice is the inclusion of weather effects. Eye candy such as day and night cycles, plus the occasional rain works pretty well.

I'm not particularly fond of the soundtrack, though. It's a bit of a hit and miss at times, and repeats quite often. There are less weapons this time around but once you pick up the Ion Cannon it's practically the only gun that you'll need.

Most of the action takes place outdoors, and some stages involve rescue missions. The 10MB demo available from Sigma Team's web site only allows for a few minutes worth of campaign play time, which does come as a surprise. To sample the trial for a longer period, perhaps you can try here. The readme file has some information on how to enable blood, right at the end of the text.

The only drawback of this worthy sequel to the original Alien Shooter is the number of levels. There are only ten stages with the last one featuring two bosses. Some players may feel that this game is quite short and the addition of a survival mode may not be enough to warrant it's purchase.