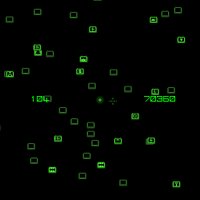 Kill Your Television is the latest release from dessgeega, a game which only took her two days to code. Though minimalistic, the gameplay does bear some resemblance to Every Extend.

Invading television ad commercials and junk programming are attempting to influence your brain, rightly represented by a miniscule green dot in the middle of the screen. Use your telekinetic powers to disable these harmful objects and save the world, or at least yourself.

Shooting a television twice will cause it to explode, sending shrapnels in opposing directions. Other televisions hit by these shrapnels would either be deactivated or blow up as well, setting off a chain reaction and increasing your multiplier bonus.