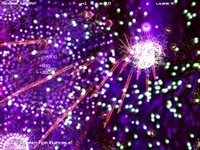 formerly CG_01, bullet candy is a single-screen area shooter in the style of robotron: 2084. which is to say that the player can move and shoot in any direction, and moving and shooting are independent of one another.

as such, the game was clearly designed for a dual-stick controller. i couldn’t get my playstation2 pad to work with it, so i was forced to use the less desirable default control scheme: keyboard for movement, mouse for aiming. this is somewhat awkward, though it does allow a 360-degree range of shooting, which the developer seems to feel is essential to the game: there’s no keyboard-keyboard setup (if there was i could at least use joy2key to map the controls to my pad manually). 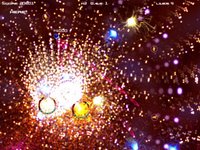 the game’s agenda is reflected by its final title, chosen late in development. a seeming allusion to “eye candy”, the game makes use of a number of tempest 2000-like screen and particle effects. (a bonus game mode, “minter mode”, is even named for llamasoft’s YaK.) though the sprites themselves are somewhat bland, the graphical effects are pleasing to look at, even if they sometimes add to the confusion on-screen. 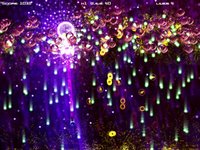 the waves of the game are varied in an arcadey sort of way, refreshing when most developers think “next stage” equals “current stage plus ten enemies”. the waves contain the prerequisite hapless victims, who are hunted by invincible enemies and captured by others for defender-style upgrades, and the player attempts to balance rescues with dodging and returning enemy fire. bullet candy also - hinted again by the title - attempts to introduce a manic bullet-dodging element to the genre. it’s hard to navigate bullet curtains when you’re using one hand to move with the keyboard and the other to aim with the mouse (especially when bullet-like particle effects are exploding across the screen).

i can see this game being quite desirable to someone with a compatible controller. i, however, am not that person.

Works fine with my Playstation pads but didn't really hold my interest for long. Think I'm just getting bored of these kinds of shooters but I still love good ol' original Robotron.

For some reason, all the menus dissapear when I move my moust over them :( Crazy!

Looks nice on screenshots, but it doesn't work on my rig. The menus work, but when I click on start game they just disappear and nothing else happens.
Post a Comment
<< Home
Recent Comments
Recommendations