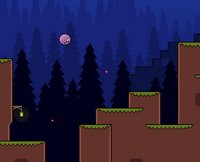 the name alone convinced me to download within a deep forest. it was all i expected it to be. the game is emblematic of 16-bit game design--not the excess of unnecessary buttons and meaningless trinkets to find, but rather its abilty to create and sustain lush, moody worlds that deceive the player about their size through layers of mystery and detail. 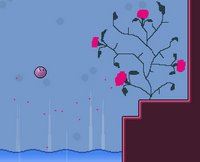 the game is drenched in twilight, the horizons frayed with purple. small pixel creatures lend hints of life and detail to the game’s massive rooms. a downtempo soundtrack ranges from hushed to softly jazzy, and hovers at the fringe of the player’s perception. the game itself is about a ball, with small eyes that sometimes blink and a short mouth that never moves. the ball bounces naturally against the looming walls and ceilings - holding the A button makes the ball bounce further, holding the S makes the ball bounce less. it’s a simple command set, but lends enough nuance to the gameplay to keep navigation engaging and tricky. 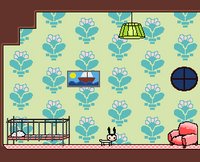 like most games of the 16-bit school, progress in the game means finding power-ups which unlock new abilities, then finding places those abilities allow you to reach. but it never becomes lock-and-key--the game works you hard for each new ability, and each ability comes with its own little trick that must be mastered: your new ball bounces higher and faster, but is consequently harder to control. it is always skill and perserverence that determines your progress. expect to replay many sequences until you are capable enough to pass them. replaying is instantaneous and painless--the game keeps just above being frustrating.

in what seems like another homage to the 16-bit school, within a deep forest contains a needless mine cart sequence. it’s over quick--bear with it. it is worth seeing this game through.

Ooh, thanks for this one, I'm quite enjoying it, very cute and addictive.

Gee, with dess on board this place will be just like Tigsource (1.0, atleast) in no time.

The look of the game reminds me more of an old Windows 3.1 game more than anything I ever saw on console. Though it looks a lot better than that, too..

If there is one thing I think games nowadays need it is more mine cart stages. There is no game that could not benefit from one!

This one has a frustratingly difficult control scheme. You'll see...

...I JUST WASTED 9 HOURS NON-STOP BEATING THIS GAME... I'M GOING TO EAT YOU AND ITS MAKER.

I just beat it with him. I agree. You owe me a new Keyboard.

This game has the coolest and funniest endings to a game that I have ever seen... EVAR!

I'm sure I'll have more thoughts when I'm done, but thus far, here are my two conflicting reactions:

(1) I really like this kind of platformer game and therefore am enjoying Within a Deep Forest.

(2) I really don't like games where the gameplay is built around a deliberatley frustrating mechanism and therefore I'm pretty skeptical of WaDF overall.

I haven't come out on which impulse will win out. I've gotten six of the ten forms. Sometimes the game is very clever (e.g., the spider, the colored line sequence before the yoga ball), but oftentimes the "puzzles" just involve the quease-inducing sloppy controls on 90% of the forms. One of the forms (glass) seems like a total gimmick thus far (it lets you bypass a zone very easily, but has no general applicability), but the others are pretty well balanced.

I agree with dessgeega's point that the game never feels like keys and doors, which is definitely to its credit. Sometimes, though, I feel like the game shortchanges the player of the sense of satisfaction that other games like this (Metroid especially) provide. Well, anyway, more thoughts when I've won.

The shift key is your friend.
<< Home
Recent Comments
Recommendations