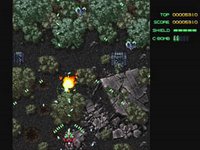 Jaguar 2nd Stage by Ham Corossam is a vertical shooter reminiscent of early Raiden series. Unlike other freeware Japanese shmups, bullets travel faster than your ship although they hardly occupy every inch of the screen. Which is a good thing, since we get to see the amount of detail in each sprite as they make their swift appearance before being blown to bits.

There are four ships to choose from, each with it's own strengths and weaknesses. Shields can be replenished during the journey. Hold down the Z key to shoot, tap the X key to launch the civil bomb and press the F1 button to pause the game.

loads a Page Not Found :(

There's no link to download directly, and the url that looks like it's supposed to be copy and pasted is filled with question-mark block characters. Pasting this url into the address bar gives a 404.

I wasn't able to download it from the homepage as well. You can try to download the game from http://pc.hrej.cz/plne-hry/akce/jaguar-2nd-stage/ (click "Stáhnout jaguar2.zip (0.74 MB)" near the bottom) for example.

Please stop stealing his graphics if you are that person.

P.S. I always get a DirectDraw error of some description? anybody else getting this?
Post a Comment
<< Home
Recent Comments
Recommendations