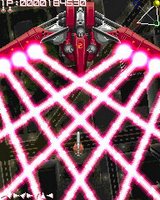 Hizoka.T.Ohkubo had developed several other side projects before achieving fame with Warning Forever. One of them was Shooters Solitude, a vertical-scrolling shmup with quality sprite designs and backgrounds.

Perhaps one letdown was the complicated power-up system, requiring a player to memorize moves in order to activate weapon upgrades, shields or special attacks. It's quite necessary to remember a few to stand a chance against the final boss, which could have been simplified by implementing an upgrade system similar to the one employed by Konami's Gradius series.

To make matters worse, the only way to gain more energy for upgrades is by shooting two or more enemies of the same color in sequence. Still worth a try considering that it could have been an amazing shooter with some minor adjustments. Plus any shooter veteran can get quite far without learning any of the commands.