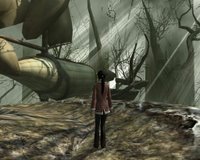 A sequel to The Longest Journey, Dreamfall had disappointed many fans of the original with a new control scheme and action-oriented gameplay. Presumably this decision was made with console owners in mind, though camera angle issues still exist.

The surroundings are a delight to explore at first, but the amount of backtracking meant that most locations had to be revisited several times. Some puzzles are now cleverly disguised as stealth missions to prolong the adventure with mixed results. The ending is unsatisfying, and character models look absolutely nothing like the promotional materials found in most advertisements.

If you're sticking around for the conclusion, then it'll probably be a rather long wait. Cliffhangers, unresolved plots and lengthy cutscenes are rarely considered ingredients for a well-written story.

Brilliant game, though. I almost cried at one point...

(I thought the original was mediocre, and still don't understand how it has managed to get so many fans, so I didn't have high hopes when I started playing Dreamfall. So it was a really nice surprise)

A decent story, interesting visuals and the lack of an actual game are a far call from brilliance.

TLJ was so much better, and vastly longer.

Dreamfall is a brilliant game with great story and a very good script (especially later when the main characters' plots intertwine). The stealth scenes are not the best I've played, but they are not frustrating. The criticized action scenes are actually pretty rare and fun.
As for the ending - it finished one story and left another open. So what? Shall I despise the game because of it?
No. I am eagerly looking forward to the third installment.

I loved this game and gave it a very positive review. I loved the story, which is one of the best written for a game I've seen. The characters were so believable and I actually cared about them, something not many games can pull off.

As mentioned, the stealth and action secnes are pretty minor and not really a problem. They are there to add tension, not difficulity. Hell, quite a few action scenes can be skipped completely.

Sure, it's a proble that there isn't much game here, but the story, world(s)s and characters all made up for it. To be honest, I hardly noticed the flaws because I was so captivated by the above mentioned things. I'm really looking forward to the follow up, here's hoping they fix the mistakes this one made.

Just got done playing Dreamfall, I was enjoying the story and couldnt wait to see what happend next until... nothing happend anymore, the story was cut off without tieing up anything and I find it very fustrating since the game had nothing else going for it what so ever, the combat sucked, the puzzles were easy... all that was good was the story, and in the end that crapped out too... Bah!
Post a Comment
<< Home
Recent Comments
Recommendations