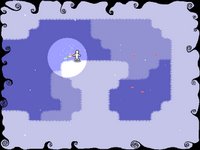 The developers of Painajainen had noted that this platformer was partly inspired by both of autofish's earlier efforts, namely seiklus and velella. Made in two weeks for a Finnish game competition, it chronicles the story of a boy trapped in his own dream.

Finding and getting butterflies to follow your character grants you special powers, with subtle hints on each ability provided on the same screen. Press enter to access the map and a progress chart. A few bugs exist but can easily be solved by pressing the E key for a quick return to the starting point. The save game area is located just next to it.

Was Velella actually a game? I only remember a small flying engine thing.

Surprisingly fun game. Controls are a little buggy sometimes and some of the effects (particularly teleporting) seem like placeholders. Still, it's perfect difficulty for a coffeebreak one-sitting game. :)