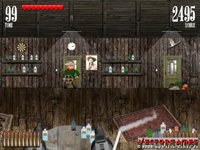 It's not cool to shoot people. That said, Texas - The Official Gunslinger Congress is an alright shooting gallery simulator with plenty of stuff to aim at. Pack of smokes can be collected for a nice effect, although nothing else happens. This is to discourage others from picking up the habit.

The objective of the game is to get the highest score possible in two minutes. Pressing the escape key while playing will cause an exit sign to appear, and the vulture which appear on the main menu screen can also be taken down.

I like this. Most fun I've had with a game seen on this site in a while. Well, since that Terav thing. That was great.
Post a Comment
<< Home
Recent Comments
Recommendations