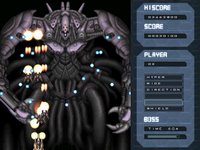 Urban Uprising: Dark New World is considered to be a sequel to DHC's previous release with the same title. Sporting an upgrade system similar to Konami's Gradius series, the vertical shooter can be difficult to play without a strategy or two.

Fortunately, shooter veterans should find no problems adapting to the shift of perspective. Activating the shield is usually the first priority. It's also useful to have another protective barrier ready at hand even when one is already in place, since bosses could take some time to defeat.

Press the Z key to shoot, tap the X key to enable the power-up of your choice and hold the C key to lock the options' shot direction. One of the best offerings from this particular company.