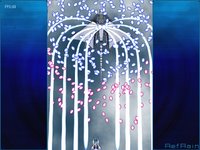 Another Comiket 70 release, RefRain Prism Memories is a rather poor effort when compared to shmups from other developers. Granted it's only a demo with only one difficult boss fight, though that's no excuse for RebRank to showcase mesmerizing bullet patterns and little of anything else.

Bullets fired by the player doesn't seem to cause damage, and the collision detection itself requires plenty of work. Certain enemy projectiles can destroy your ship just by grazing any part of it, while others will only have an effect if it touches the hit point.