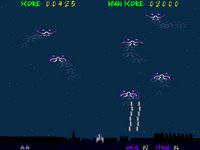 Demon Attack is a pretty good remake by Harold Thijssen, and an improvement in nearly every way over the original. Gameplay is rather similar to Galaxian, in which an enemy would swoop down on your ship when dropping bombs isn't enough to annihilate the player.

The speed at which a bomb descends can be reduced or removed entirely. There's also an autofire option and save game function included in the package. A competent remake, although Imagic's classic doesn't exactly have the sort of pulse-pounding experience that would entice most shooter veterans.