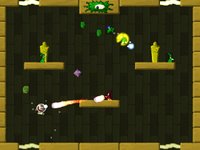 In The Pyramid, your objective is to guide a protective capsule through the corridors of a pyramid while shooting at any object with the intent to harm. Sacrifice your enemies to the level guardian to open a new passage in each room.

A pretty good remake by Chris Roper, with nothing less than four control options made available to the player. Plenty of additional accessibility functions have been included, such as a difficulty setting, an autofire toggle, display modes, everything but the kitchen sink apparently. Having a monster book to record your previous encounters with the denizens of the sacred tomb is a very nice touch as well.