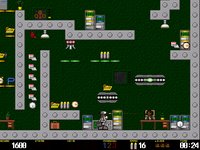 Special Agent is the new platformer by David Newton, who was also the creator of Treasure Tower. This effort only showcases three levels, and there is still much work to be done though entirely playable in it's own with two game modes on offer.

You're cast as a secret agent, entrusted to carry out several mundane missions around the world to eradicate some evil mastermind and put a stop to his nefarious plans. The controls require a bit of practice, since there are two shot buttons mapped to the A and D keys. This allows the player to aim left or right regardless of the direction he is facing. Hold the S key to jump. It's possible to skip the high score submission process by pressing the tab key at the right time.

The 2D sprites are decent enough, and there are no bugs to be found anywhere but it's not really at the top of the list of best platformers released this year. Still, a worthy addition nonetheless.