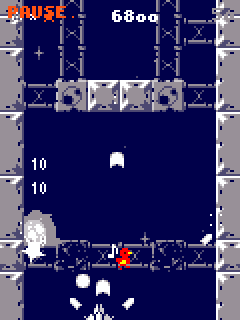 Ranking and Score Attack Mode are only accessible after completing the game once, but here's a cleared.bin file (with No Miss Clear replay) which can be unzipped in the temp_guxt folder (automatically created after running the game once) to unlock the new extras.

Some noticeable differences:
- Trial Mode is now called Score Attack.
- The cleared.bin file from the previous version cannot be used to unlock this new mode, although all replays will work.
- Several sprites and enemy flight patterns changed.
- An additional bonus (like Ikachan) can be found by shooting one of the middle tiles halfway through Stage 3.
- There's a proper ending sequence now, in which the entire cast (enemy ships and bosses) are properly introduced as the credits roll.

This should be the final version of Guxt released by Pixel for a long while. [Score Attack replay, more entries about Guxt]

it's a shame more cats aren't jazzed about this gem of a shmup. i haven't seen stage design and enemy rollout this diverse and well executed in ages.

isn't pixel supposed to RECEIVE gifts on his birthday?

I tried it the first time I saw it, and I've tried it's most recent update and it's still just bleh...

Does someone have a replay. It's too hard! :(

I'm afraid tim, that I need your play-records directory. I already have the the game, but it's very hard. I could beat it, but learning enemy patterns is veeeeeery time consuming. I can do only so much with my reflexes alone.
Post a Comment
<< Home
Recent Comments
Recommendations