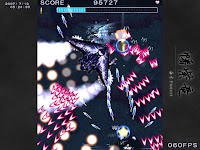 Banshiryuu is an upcoming Comiket release from Syunsatu Sare Do, featuring three levels packed with enemies, bullets and the obligatory boss battles. Four difficulty settings are presented to the player before the character selection menu is shown, with the easiest option located on the top left of the screen. The girl with a kimono has a primary weapon which practically obliterates most bosses at quick speed, and is perhaps the best choice for beginners seeking to play longer than a couple of minutes.

Hold the Z key to shoot, and press the X key to launch a bomb. Hold the shoot button and left shift key together to use your secondary attack option. [source: Danmaku Gata]

Why do all these shooter games look and play alike...?

Thats what I was thinking...