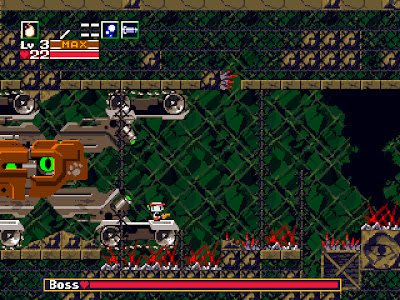 Jenka's Nightmare, a prominent Cave Story mod by Mark "Shmitz" Major was updated a few months back, marking the first release since the original one about a year ago. According to the author, this new version contains about 75 to 85% of the mod's full content.

The mod follows on from the "Sacred Grounds" ending from the original game. A short time after leaving the island, Quote is teleported back by a distraught Jenka to a familar looking cave - however, it seems to have gotten a lot bigger since he was last there.

Jenka's Nightmare is a good deal harder than Cave Story - but it's not the frustrating kind of hard - it's the good kind of hard. The kinda hard where everytime you die, you just want to retry and take one more shot at whatever killed you. But don't worry - if you managed to take Ballos out in the original Cave Story, it "shouldn't be anything you can't handle", as Kanpachi puts it! 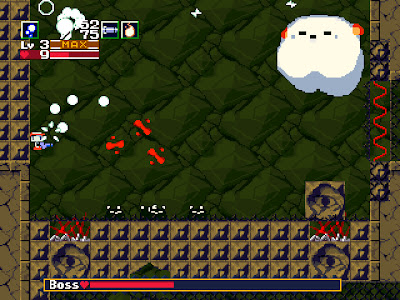 Of all the Cave Story mods I've played, Jenka's Nightmare is easily my favourite. It's clever and inventive, it gets the character's personalities right, and best of all, it's fun. And right now, it's the closest thing out there to a Cave Story sequel. Highly recommended to anyone who likes challenging platformers - or to anyone who just misses Cave Story.

How does one make a Cave Story mod? Do you have to know programming and directly edit it, or is there an editor?

Paul: There's an editor called "Sue's Workshop" that allows you to modify maps and scripts and so on. You can do pretty much everything with that. There are also a few people who hack the exe directly to change little things about the game's behavior (Legacy Story changed a few gui things, I think).

It certainly plays interestingly. The difficulty wall is fitting to players that have finished the original and are already in the level of skill to face this one, though it can be very frustrating to try and beat enraged mimigas with 7 HP.

Also, it's probably not the best thing to have a weapon with limited ammo as the very first. I didn't notice it had ammo until it ran out, in which case I had to go all the way back to replenish it. That's very frustrating.

I only played until Grasstown, and right now I'm going to wait for the full release. The characters are well portrayed and the tiling work, though not perfect (some rough edges here and there, is interesting nonetheless.

Wait - I was under the impression that Pixel wasn't happy about mods being made? Or was that just a rumor?

As far as I can recall, when asked about mods, Pixel's said he doesn't particularly mind, but thinks it might be more interesting if people made something wholly original instead.

Oh, incidentally, I've been playing a bit of Jenka's Nightmare. It's actually pretty darn good. I didn't even know some of the dynamic terrain changes it makes were possible in the engine.

Wait until you see Monster-X - that's what eventually sold me on this one :)
Post a Comment
<< Home
Recent Comments
Recommendations