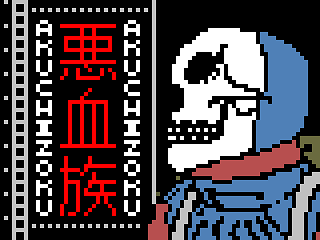 Okay, maybe not Clean Asia II. But nearly a sequel in a sense. It's cactus' shmup-dev game number two. This time the game seems to be very retro.

The title is "Akuchizoku", which is bad Japanese for "Evil Blood People". The current plan is to have it play for five very different levels, with the possibillity of an additional small bonus level or two. You get to pilot at least five different fighters, and the game will have a custom made score by John Marwin plus an in game storyline. And it will be shareware, because both authors are apparently in need of funds.
However, there is no price on the game, instead the "customer" makes a donation of at least $1 to get his copy of the full version. Generous donators will be extremely appreciated and therefore get their names in the credit (and possibly a few subsequent cactus games for free, if the economic situation allows it). For those who feel that games should be free to play, there'll be an optional demo version with a bit over 60% of the content from the full version available for download. Note that the full version will probably be released for free whenever there's no point in requiring donations anymore. So anyone who "buys" the game shouldn't consider it that way. Look at it as a donation, and feel that you've done a good deed instead.
Additional screenshots: [1] - [2] - [3] - [4]