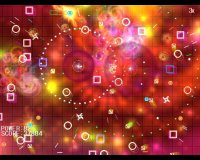 Vector Infector is another release by Oddbob that resembles Geometry Wars, featuring fifty rooms filled with geometric shapes bent on your ship's destruction.

There are some notable differences when comparing this version with the console hit. For example, the only way to power up your weapon's attack strength is by collecting gems that vanquished enemies leave behind. The game also has a wrap around playing field, where sprites that go over the edge of the screen will appear on the other side.

Two control options are made available to the player. Pressing the Z key will cause your ship to fire in the direction it is currently facing. Shots can also be directed by using W, A, S and D keys.

Looks very promising even if it's still in early development stages. The download link can be found in the forums by clicking on the Word tab, then the game name. The latest build is at the bottom of the page.