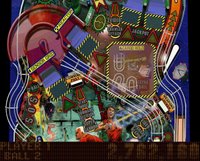 Balls of Steel: Creature Attack basically has all the features of the original that it was named after but only showcases two tables.

If you're a fan of pinball simulators and were left disappointed by how miniscule everything looks in LittleWing's Monster Fair, then do give this a spin. The screen scrolls up and down depending on where the ball is, and the frame rates are pretty good as well. Animation is smooth although some players may get a headache from all the rapid movements.

There are plenty of missions to undertake and most of the dotpanel mini-games are quite fun. The screen does change to fit the entire table when multiball is activated.