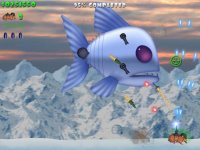 Mighty Rodent is the latest release from Jagged Blade Software, which plays pretty much like PopCap's Heavy Weapon. The percentage completed indicator shown at the top of the screen is a welcomed change, and no longer do you have to struggle with hitting ground units.

Some of the enemy projectiles do blend in with the background, making it difficult to distinguish at times thus complicating the task of avoiding them. The backgrounds are reused a little too much for my liking, and it's quite obvious that not enough enemy sprites were made for this game. It stretches a bit thin at times, and players would probably be shooting at the same enemies in just about every stage.

Reminds me of Silkworm, minus the helicopter.