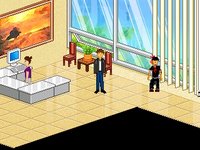 Stan Ames Episode 1 - Murder Incorporated is an adventure game made using the AGS engine, the first in a series of episodes planned by Jeremy Atkinson. The story is about a washed-up private detective who has to investigate the mysterious disappearances of key personnels of a top pharmaceutical corporation.

Much like Pleurghburg: Dark Ages, the developer has crafted an engaging storyline that will keep players guessing the outcome right to the end. Graphics are a bit of a mixed bag, but the use of an isometric view and backgrounds works pretty well in most areas.

The game is not without it's problems. Hotspots are not indicated with labels, making puzzles that require a certain amount of pixel-hunting much harder to solve. There is one point during the adventure where the act of acquiring an item which is needed to progress is a little illogical. Also of note is an action sequence as the final act that isn't too difficult, but an option to skip would have been welcomed by less dexterous players.

An excellent effort by a newcomer to the adventure game development community, and one of the more ambitious AGS projects undertaken by any developer.