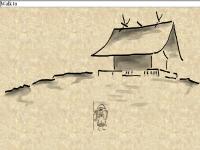 Biwa of Blood is a short adventure game developed by spb for the April 2004 MAGS competition. Brush strokes are used to depict sprites and backgrounds, a technique also employed by Jon J. Muth for the penultimate issue of Neil Gaiman's Sandman.

It's story is based on an old Japanese folklore, hence the unique setting. The game does not feature any sound or music, which is understandable since the entire effort was coded in less than a week.