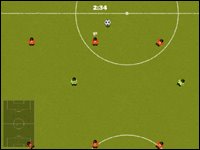 Kickin' Soccer by Phelios is a rather average soccer simulation, featuring an overhead view of the football field much like Sensible Soccer.

Some of it's problems include missing officials, no substitutions, absence of player names and lack of replays. The developers probably have not heard of the offside rule, and it's a crime not to have England as a playable team in the demo. It wouldn't matter much, since footballers in this title have zero personality.

Billed as an action game, Kickin' Soccer certainly fits the bill but not much more than that.