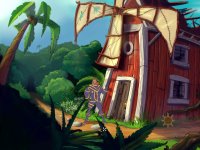 It's interesting to note that the entire game was made by one female developer, with a little help from a musician.