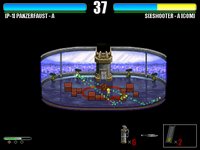 Alphasix is a 2D overhead game made in Game Maker, which combines elements from different genres. It's at heart an overhead fighting game, similar to the Street Fighter series: you choose one of five characters and battle in one vs. one battles until you defeat all the others.

But instead of martial arts, you use guns, knives, grenades, mines, and danmaku (bullet curtain) attacks -- inspired by the Japanese genre of the same name. These are special bullet patterns composed of hundreds of bullets which you or your opponent must move around and avoid being hit by.

There are eight difficulty levels, thirty stages, and forty-five danmaku attacks. The controls are a bit complex and the game make take a few hours to get the hang of (a tutorial mode was provided to help ease the learning curve).

The gameplay video can be watched here.