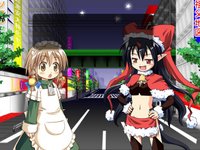 I've uploaded a gameplay footage of MaWaRu Maid-san wo Nemigi to YouTube, a Comiket 70 release which parodies the WarioWare series.

What follows in the video is an appearance from King of the Cosmos, the highness himself (from Katamari Damacy and I Love Katamari). Then some mini games featuring characters from the Touhou series (Touhou Soccer, Mega Mari, etc.)

The first boss fight is actually a very nice clone of Spartan X (known in the States as Kung Fu Master), more faithful than Babarageo's Great Kung Fu. Unfortunately it's only one level long. The cutscene in the last area introduces a character who is barely dressed, and a short tribute to Akuma from Street Fighter.

Some notable appearances include an Afterburner clone and Lethal Application.

A short review was posted back in January, and a demo is available from the official web site. Just click on the red button with the word 'C69' to download the trial version.
Posted at 2:18 AM by Tim
post a comment  |  0 comments