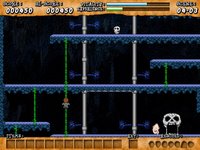 The Goonies 20th Anniversary is an excellent remake of the console classic by Retro Remakes competition veterans. Your quest involves saving a group of local kids trapped in an underground cave, and perhaps stealing a bit of loot while you're at it. You can punch at the enemies to protect yourself and collect vitality drinks to restore health.

Like most platformers, there are a number of keys to collect in each stage though your character can only carry one at any time. A save function can be accessed from the main menu by pressing the k and control key at the same time. OSX and Linux versions are available as well.