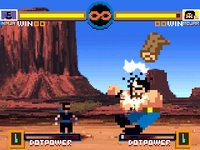 Takase's Dot Fighters is quite a departure from his previous work. Detailed 2D sprites prominently featured in Arm Joe have now been replaced with characters made out of huge pixels. Their faces are usually made out of several colored squares, with eyes and mouths left out of their portraits to accomodate the new style.

There are plenty of moves to choose from, with devastating ones limited to the amount of Dot Power that you have accumulated during each fight. Only four fighters are available in the latest version, though Quest Mode does include additional boss encounters and bonus rounds.

Only two attack buttons are ever used, but there's plenty of moves to learn and executing them doesn't require excellent memory skills. Press the A key to punch and tap the S key to kick. The escape key can be used to pause the game. Press alt-Enter to play in full screen mode.

Combos are usually initiated by tapping one of the action buttons repeatedly. Additional moves such as air combos, reversals, throws, safe landings and rolls are all here. Recommended for fans of the genre, and well worth the 284MB download.