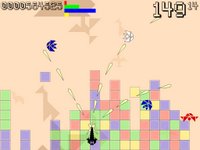 Invalid Tangram is a shmup that could have came right out of Kenta Cho's deep pockets, featuring tangram-shaped objects in four different colors. Enemies turn into blocks when destroyed, slowly filling up the background which can then be absorbed in multiples of two and above for a temporary power-up.

A handy tutorial explains most of the controls, though only two buttons are required along with the arrow keys for directional movements. Absorbing blocks will also award the player with three precious seconds worth of additional play time.

Hmmm... it's an interesting game, and somewhat fun, but that's twice it's been compared (somewhat favouraably) with Kenta Cho's games. It's not *that* good :) It's certainly got some fun, but I can't see myself playing this again next week let alone next year.

This game is seriously great. The comperisons with Kenta Cho's works of art are not undeserved.

At the very least, I enjoyed it far more then Mu-cade.
Post a Comment
<< Home
Recent Comments
Recommendations