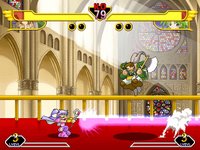 Light Destiny is a pretty good doujin fighting game which was developed using Enterbrain's 2D Fighter Maker. Your character's attack strength is dependent on his or her current level, as indicated by a gauge at the bottom of the screen. This can be increased by executing moves or landing punches on your opponent.

Players are recommended to configure the controls to their liking before starting a game. Parries and safe falls most commonly found in Capcom's flagship series made their way into this production as well. Each character has their own distinctive special and super moves, though all are explained in the accompanying manual included with the download package.

An excellent alternative to Arm Joe.

Is this game actually worth the download? I hate downloading these 50+ MB FM2k2 games only to find that they're crap.

Well, I do. But not every one is good.

I guess I'll just have to try it, GAWSH!

I love a quality 2d fighter more than any 3d fighter...

but most of the ones I've tried made with Fighter Maker just seem a tad on the crap side despite sometimes having some nice artwork.

Hi, i have a problem with this one.
I can't unzip it correctly.. :(
I use win XP and 7zip.
How can i decompress this correctly? Any help is welcome.

sorry for not putting more effort into the FAQ... :(

Thanks Tim. I had already read the faq. Adding asian language support, i don t think will solve my problem... I'll give it a try btw. See ya and keep cool Indiegamer ;)

I downloaded and unzipped the game, but it doesn't work. And the first link mentioned in your FAQ doesn't work anymore (here : http://indygamer.blogspot.com/2005/06/faq.html#h2)
Post a Comment
<< Home
Recent Comments
Recommendations