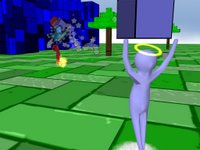 An award-winning DigiPen student entry, Toblo is best described as a capture the flag game with a world of blocks as it's setting. Physics play a large part in this production as buildings, trees and structures can be torn apart and taken piece by piece to be used as weapons.

Throw a block at your enemy to stun them, and they will spawn back at their base in a matter of seconds. You can carry up to fifteen blocks at once.

A pretty good multiplayer effort with plenty of potential, assuming that more maps are added and some optimization is done for future releases.