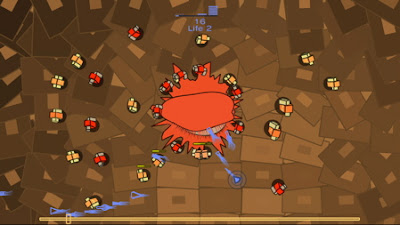 Sony Computer Entertainment has acquired rights to publish the IGF award-winning entry Everyday Shooter on the Playstation Network, due out very soon. The new version will run at 1080p and a consistent rate of 60 frames per second. According to Newsweek:

EveryDay Shooter is a twin-stick shooter. You steer your ship with the left analog stick and fire in whichever direction you push the right analog stick. You can simply shoot down all your enemies and collect the pixels they leave behind for points, but the most efficient way to take them out is to shoot the objects that trigger chain explosions. But each level not only looks completely different from the level that came before, it also has its own rules as to how its explosive chains work.

Best of all, the surreal graphics are vector-based, which means that they're created from mathematical equations; and every enemy you destroy plays a musical note or a riff which is layered on top of the default musical theme for the level. The whole thing adds up to a unique experience that requires your complete attention at the start of each level as you try to figure out its rules, then zone out once you know what you're doing.

i was just over at jon's yesterday, and it looks SOOOO good. man, free anti-aliasing is awesome.

but, does this mean that ps3-less bums like myself get denied the goodness of a pc rev?