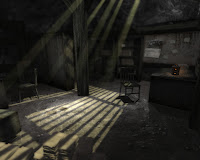 Penumbra: Overture is an innovative first person survival horror game using advanced physics interaction. Instead of relying on combat as the main gameplay element Penumbra focuses on puzzles, exploration and enemies have to be dealt with by using wits rather than brute strength. This creates a unique experience in an atmospheric game world.

Penumbra tells the story of Philip, who in search of his presumed dead father uncovers more than he could ever had imagined. Trapped in an underground complex below the icy wastelands of Greenland, Philip needs to not only fight for his survival, but for his sanity as well.

Penumbra: Overture is to be released in two more episodes during 2007-2008. More information can be found at: http://www.penumbra-overture.com/

Frictional Games has also released a quick tour of their 'office' which briefly describes the conditions under which Penumbra: Overture was developed. The tour can be found at: http://tour.frictionalgames.com/
Posted at 7:08 AM by Tim
post a comment  |  3 comments

I got my copy from play.com today, nice box-art and colour manual. That's good. Looking forward to testing it.

i gave a quick try at the linux demo on my ubuntu edgy..
but i couldn't start it due to an error..
lucky me, this error was documented on the game forum.. as soon as i get some spare time i'll try the proposed solutions and fix and the demo itself...

i'm really happy they give linux users the chance to play...

I've now installed and tried the game, and it's quite atmospheric. Reminds me a lot of Call of Cthulhu: Dark Corners of the Earth, which is one of the best games you've never played.

I'm definitely looking forward to playing more. But I think it's allready safe to say that I'm happy with this purchase. Ran pretty well on my ancient PC as well (I was worried I'd have to wait until my planned computer upgrade, but there was no need).
Post a Comment
<< Home
Recent Comments
Recommendations