Monday, April 02, 2007
Thruster
Thruster is a caveflier, originally released for the Tapwave Zodiac, then ported to the GP2X, and now Windows. The game's concept is based on an older black and white title called Spout, by Kuni. Here are some of the features of Thruster.
Art and music in Thruster was inspired a good deal by Rez, resulting in background images and sounds that will be familiar to fans of the latter. 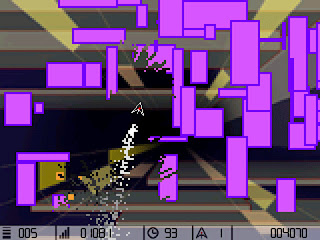 Use X to select menu items and active your ships thrust. Space will pause the game, as well as going back in menus. Using the arrow keys to steer your ship, propel yourself upwards and erode the landscape with the thrust particles.

(Thruster wallpapers can be found here, via Mentisworks)

caveflier? Is that a newly invented term for thrust-type games? It's pretty cool.

Oops, sorry I missed this comment :D. I didn't come up with that word actually. I've seen it used elsewhere in reference to Spout. It does seem fitting though, so I figured "why not."
Post a Comment
<< Home
Recent Comments
Recommendations