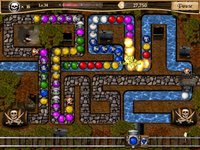 Pirate Poppers is the product of a collaboration between Playfirst and Mystery Studio, the latter responsible for Betty's Beer Bar and Wild West Wendy. Gameplay as usual involves matching three or more balls of the same color to remove them from the playing area.

Making several matches in a row will present opportunities to collect treasures. A treasure cove accessible during your adventure serves as a gallery to showcase the loot you've plundered.

The pirate theme is omnipresent throughout the entire game. Background music, sound effects, naming convention of powerups, pieces of map that hides a secret, levels, even bonuses are all meticulously designed with skulls and crossbones in mind. The only thing you probably won't get out of this one are duels and swordfights.

There are two additional gameplay modes if you manage to complete the original campaign. The puzzle mode is an interesting addition as the number of balls you're allowed to shoot out of the cannon is limited. Although there's no time limit, all shots must be judged carefully as most levels only present one solution.