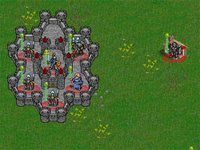 Battle for Wesnoth is a very good programmed turn-based strategy-game and it could be commercial. Thank God it isn't. So you will be able to enjoy countless adventures, battles, sieges, or getaways. It doesn't matter if you like multiplayer games or if you prefer single player games: Battle for Wesnoth satisfies every kind of strategy-player. Having homogenously designed graphics and a nice soundtrack, you wont be able to resist the charm of this title...

With about 200 different units, 16 Races and 6 different factions the diversity of Battle of Wesnoth is huge and should serve everyones needs. The maps also are designed beautifully - terrain affects the moving range and battleskills of a unit. You will find items improving your properties. Battle is being evaluated automatically. 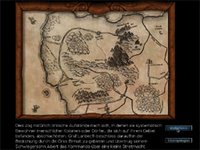 Battle of Wesnoth has no sprite-animations, the figures can face in different directions, though. Generally the gfx remind me of boardgames, which I like and which fits the game nicely.

The real challenge lies in the tactical depth of Battle of Wesnoth, which not only consists of killing an enemy unit (well, after all, you HAVE to eliminate all enemy units...), but also to have villages in your command, with the money of which you can buy new units. An important fact is also that you can heal your units in a village being in your possession, and as your units gain experience and improve hereby their skills, it is advisable not to loose your warriors in combat.

Battle of Wesnoth surely is one of the biggest freeware titles out there. If you like turn-based strategy or even RTS-games, you won't forget the day you first heard of Battle for Wesnoth. Because you really are sucked into this rich medieval-fantasy world and will take some time to exit it again...

Developers and artists are robbed by their corporate masters ...er... publishers. The indy and freeware scene is the answer my friend. Let talent shine and never forget that not everything HAS to be sold. See beyond money.

Sorry this game was just dull. Not that nice to even look at either.

And I got no problem paying for a game if it's quality like just about every recent purchase I've made has been, bar Sensi Soccer 2006... which I managed to sell off on ebay today.

Whether you (or I) enjoyed this specific game or not, just doesn't have anything to do with the issue of having to pay for quality games....

And not only that, Mr. Anonymous totally seems to fail to notice that freeware titles still are a lot of work, and sometimes the result is even better or more creative than a commercial title. So on the one hand you have a commercial title, whose developer earns money and on the other hand you have a freeware title, whose developer doesn't earn money. If both games are good, which one should you support?

In addition to that most of the big commercial games are big economical machines and by buying a title you support the publisher in the first place. I think it a lot better to donate to a independent freeware developer than to support the always getting bigger gaming industries like EA Sports or whatsoever. Games can be art - and most of the time these artful games are freeware titles.

Excellent game, better than Fantasy General. Now, if only it could have FG's music...

And not all good games have to be commercial. I purchase many indie games, but there's nothing bad about people creating games for the sheer acts of creation and sharing their work.

Starting playing this about a month ago and absolutely loving it...Just works so darn well.
Unfortunately my laptop broke (had my save games on it).

I found it very entertaining for a while, fun multiplayer and has a good variety of singleplayer modes.
My main problem with it is the randomness that often wins, and more irritatingly, loses battles.

Nonetheless its a fairly deep game and is worth a try :)
Post a Comment
<< Home
Recent Comments
Recommendations