Six students have realized a quite ingenious RTS game. While the gameplay does not differ from "genre-brothers", the gfx are very special - and very beautiful. Dark Oberon is a rough diamond among the freeware strategy-games, which could with some additional effort become a true gem in its genre... 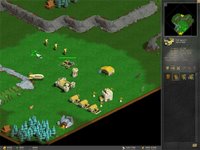 The gameplay is pretty much like you know it from other RTS-games: Build, collect, build, train, collect, fight, fight, fight! You normally start with a small homebase or even without that, only with some peasants. The resources that are being collected during the game are wood and gold, food is being automatically added when you construct a farm. The homebase can be upgraded to bigger and stronger buildings, as can the tower and the workshop. Your only units are: peasants, knights, catapults and zeppelins.

They modeled everything what you can see in the game out of plasticine, took a picture of the item and integrated it as sprite in the game. The resulting look is awesome. There even are animations to be seen, the soldier walking cycle for example.

Also perfect is the music, which is dreamy and adds a warm and fairy-like atmosphere to the game. It perfectly stays in the background, and it really is not getting on anyones nerves, even after playing the game for a longer time.